If you are looking for a compact and affordable but yet powerful stand mixer, you should consider the Hamilton Beach 63221. It is a mixer like no other, suited for home baking. It performs efficiently in most mixing functions. Its 400-watt motor engine, powers the appliance to ensure that the speed remains constant as set. Besides, there is also a 4.5-quart bowl, which is stainless steel. Unless for its limitations on the volume of the dough, is a great basic mixer.

The performance of the Hamilton Beach Eclectrics 63221 relies almost entirely on the 400 watt motor. It is the one responsible for the fast and consistent mixing, which is a characteristic of the mixer. While it might not rival the other mixers such as the Kitchen artisan, it performs remarkably. It makes it easier for you to make good cake batters, dough, meringues and the like. The mixer is fast and always gives good results.

The stand mixer comes with a 4.5-quart bowl to hold the mixture. It is big enough to host enough dough for a single cooking. It is also made of stainless steel, for easier cleaning. It also ensures that dough or batter traces, do not attach themselves firmly on its walls. The bowl does have a handle for easier removal and placement of the bowl. The handle is made from a good material, to give the handler a nice feel.

Tilt-head that locks in upright position

This increases the functionality of the stand mixer. It also eases the process of emptying the contents.

Unlike other stand mixers in the same line, the Hamilton Beach Eclectrics 63221 stand mixer gives you an opportunity of selecting from four colors including sterling, black, red and white. You can choose any color you want to go with your countertop.

The stand mixer weighs 26.3 pounds. This together with its robust construction enhances its stability to handle the mixing operation. With this, it is hard for the equipment to move about.

The stand mixer also have three accessories such as the flat beater, whisk and dough hook. With these accessories, you can make cake batter or knead dough, whichever you like.

The beauty with Hamilton Beach Eclectrics 63221 stand mixer is that all its components can be washed in the dishwasher, without facing breakage or scouring marks. This is a great way of removing spatters, which may arise when the mixer is set at high speeds.

Pros of the Hamilton Beach Eclectrics

For those who have reviewed the Hamilton Beach Eclectrics 63221, 580 gave their reviews. About 75% rated the product with five starts, 10% of them gave the product a rating of four stars. Hence, it can be said that about 90% of the customers, rated the stand mixer highly. Its average rate is 4.5 stars, which is remarkable. 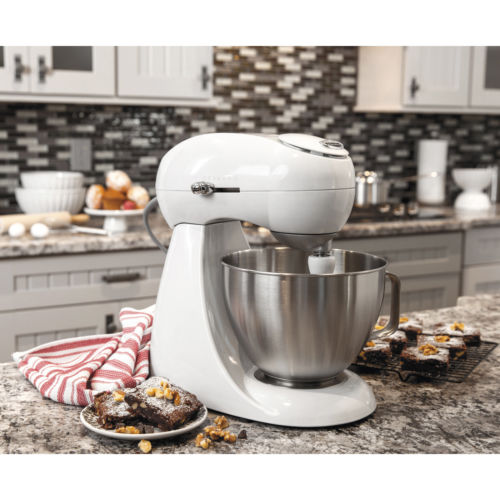 The Hamilton Beach 63221 stand mixer is an appliance you should have in your kitchen. First, it is capable of mixing most ingredients and with high speed as well as with an unmatched performance. You also have several color options to blend with your countertop. It is also quiet and very stable. Its price is also anything to go by. You can cook any baked food right at home be it cakes and all kinds of breads.