The Bosch MUM6N11UC Universal Plus Mixer is poised to replace nearly all of your kitchen appliances while delivering superior mixing power. The innovative contained design features a removable splash-guard and eliminates the annoyance of a beater arm interfering with the addition of ingredients. In addition to the included blender, this model works with attachments from previous Universal Plus models including food processors, slicers, meat grinders, and more. 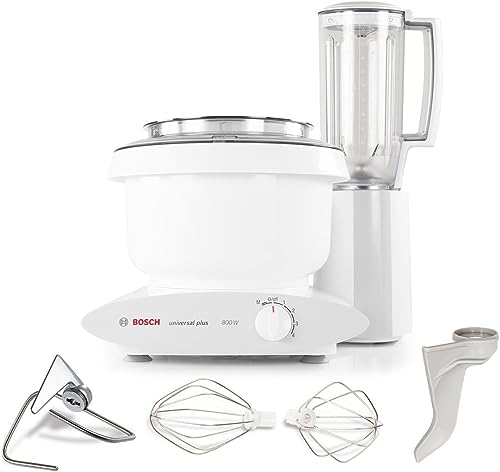 Offering a brawny 800 watts of power and a uniquely shaped dough hook, the mixer pulls and kneads large batches of bread dough into a texture that rivals handmade bread. The 6.5-quart bowl is capable of confidently handling up to 15 lbs of tough dough. When it comes to dessert, the cookie paddle attachment mix batters together in record time.

The lightweight, compact size of this “kitchen machine” makes it easy to store away in a cabinet. However, when in use, the strong suction cups on the bottom of the machine’s base secure it into place and prevent it from “walking” across your countertop.

In reading customer reviews, we concluded that serious bread-makers are positively enamored with the Bosch Universal Plus Mixer and its ability to quietly churn out 5 loaves of whole wheat bread. The majority of the reviews are immensely positive and earned the mixer an average user rating of 4.5 stars out of a possible 5.

Reviewers are impressed by how the uniquely shaped dough hook and the 800 watts of power mix and knead the toughest bread better than even the most practiced hands. One reviewer called this machine the “first power-tool designed for use in the kitchen.”

Not surprisingly, the unconventional design has won over many users. Reviewers appreciate the having the mixing component in the bottom of the ergonomic bowl instead of the standard beater arm. Users find that this design makes adding ingredients considerably easier, even while the machine is in use. Also, several reviewers who suffered from arthritis preferred the lightweight bowl over the heavier, stainless models used by other brands.

The most common contradictory comment about the mixer had to do with cleaning. Several reviewers complained that the many contours of the bowl make this mixer difficult to clean. Other reviewers found that using a stiff scrub brush cleaned the trickier areas in mere seconds. Additionally, the attachments and bowl are dishwasher safe. 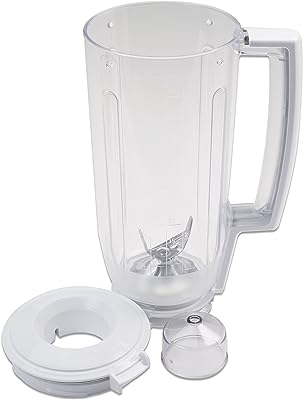 Another issue experienced by some users involved trying to mix small batches. Reviewers who used the mixer on high volumes were ecstatic with the results. However, users who made smaller batches found that some scraping was involved. Although this mixer is capable of large and small batches, it seems to run better and more efficiently with larger batches.

The majority of users enjoy the included blender attachment, which features a well-designed blade that ensures that all the contents are blended. The most common complaint with the blender is that, like most blenders, the detachable blade must be reattached very tightly in order to prevent leaks when in use.

While the Bosch Universal Plus’ 800 watts of power is one of its greatest features, reviewers noted that running it alongside another appliance in the same outlet may trip a circuit breaker. Despite its large power usage, the mixer features overload protection to guard against overheating or motor burn out.

Although more expensive than many competitor’s stand-mixers, the Bosch MUM6N11UC Universal Plus Mixer is an excellent choice for users wanting to make large batches of bread dough and utilize the optional accessories. We recommend it as an innovative alternative to traditional stand-mixers. If you’re looking to make large batches efficiently and replace your other appliances with a light-weight all-in-one machine, the Bosch Universal Plus deserves its 4.5-star rating and serious consideration.