The Cuisinart HSM-70 Power Advantage 7-Speed mixer is a versatile hybrid that changes from a stand mixer to a hand-held mixer with the push of a button. When used as an ergonomic hand-mixer, the power cord swivels and locks comfortably out of the way.

Like other mixers, this model comes with three attachments and a spatula. What separates these attachments from other mixers, however, are subtle design choices. The flat mixing beaters are especially long and wide and, unlike standard mixer beaters, they were designed without a conventional center post, which makes them less likely to clog. Everything from egg whites to cream is quickly aerated thanks to the extra-wide diameter of the whisk attachment. Two corkscrew-shaped dough hooks let this mixer tackle tougher jobs like kneading.

Since this mixer can be used manually or on its stand, Cuisinart positioned the buttons in a location that is optimized for both modes. The mixer features a 1-step power switch to give the user responsive control. The variable 7 speeds are controlled by an LED digital touchpad on the top of the unit.

The lightweight design, compact size, and low price point of the Cuisinart HSM-70 make it a good entry-level mixer for occasional use. 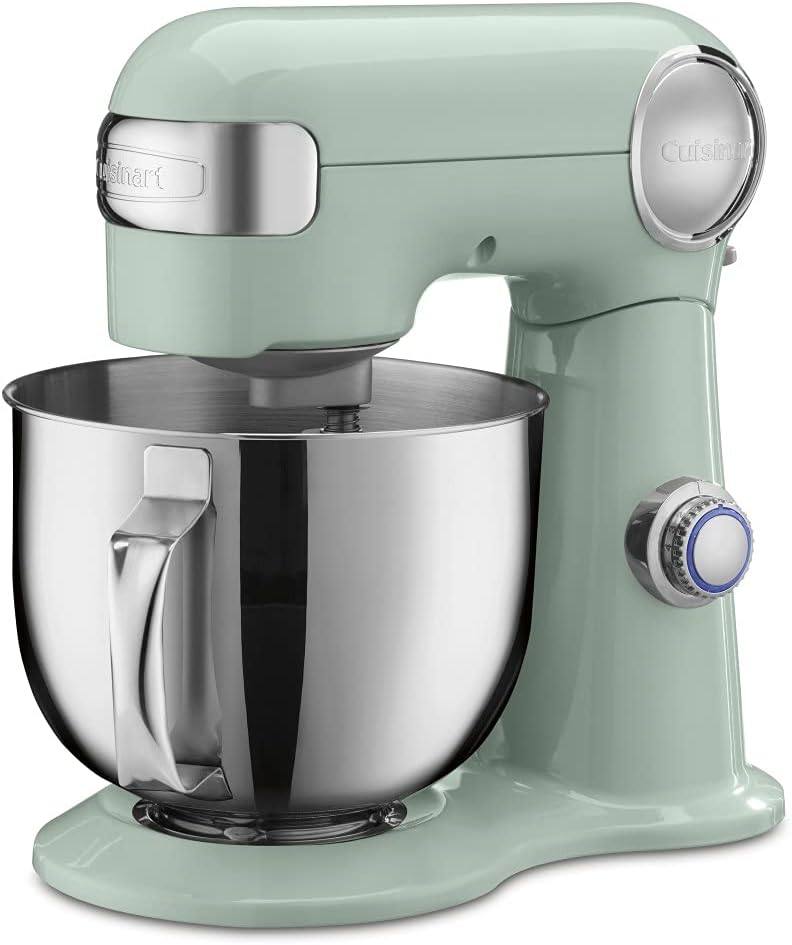 In researching reviews for the Cuisinart HSM-70 Power Advantage, we learned that most users are pleased with the product and give it an average rating of 4 out of 5 stars.

Customers who want the power of an electric mixer, but aren’t ready to commit to the expense of a stand-mixer, enjoy the versatility of this hybrid mixer. Many users prefer to use the HSM-70 as a hand-mixer and only use the stand for storage. Regardless of which option they chose, reviewers appreciated how smooth the batters were mixed by such a lightweight machine.

A complaint shared by several users involved frustration with the spinning bowl feature. A small plastic disk on the bottom of the attachments is responsible for spinning the bowl on the turntable. Many reviews claimed that the plastic disk was easily obstructed by the batter, which kept the bowl from turning as intended and made the beaters difficult to clean.

Despite offering 7-speed options, many reviewers complained that even the lowest speed was too fast for recipes that needed a gentle stir. Since the buttons are located near the mixer’s handle, some customers bumped the speed settings unintentionally when using the HSM-70 as a hand-mixer.

Reviewers appreciated its flexible two-in-one design, which doesn’t take up much counter-space or break the bank. Many reviewers agree that it’s a good deal at this price, but built lightweight for light use. Major complaints resulted from motor burnout, which occurred when the mixer was used continuously or on rigorous jobs like kneading dough.

Based on the reports of motor burnout and overheating, this model does not appear to have an overload detector. If you’re looking to use your mixer more regularly, for longer durations, or on more demanding tasks, it may be worthwhile to invest in a standard stand-mixer.

Similarly, if you foresee yourself wanting to someday try pasta-maker or food processor attachments, a stand-mixer might be a better long-term investment. If counter-space is a primary concern but you don’t want a hand-mixer, the Bosch MUM4005 Compact Mixer may provide a unique solution.

However, many users who only need a powered mixer a few times a month were ecstatic with this hybrid mixer. As such, we’re happy to recommend it to shoppers who need a mixer for light use.