We see a lot of questions online when it comes to the stand mixers and one of the questions we’ve been seeing a lot lately does stand mixer speed matter? Some mixers only have 3 speeds and others have 12 or more, is a mixer with more speeds a better option?

The speed of a mixer is actually very important. Any experienced baker will tell you that making a good recipe is not just about mixing the ingredients but also how you mix the ingredients. The mixing procedure is actually the most important part of some recipes. A mixer with 10 speeds is not necessarily better than a mixer with 7 speeds but the more speeds a mixer gives you the more versatility you will have. 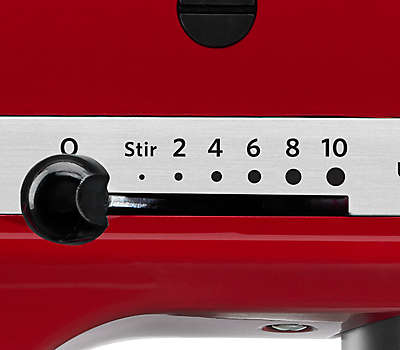 Mixing different items will call for different speeds. For example, if you are whipping cream or whipping egg whites to make a meringue you will need to use a wire whisk attachment and you will need to use a higher speed setting. Mixing at a higher speed will introduce air into the mixture which will give the item you are mixing light, fluffy texture. If you are mixing a heavy bread dough a lot of mixers will have a dough hook attachment and this attachment will be used at slower speeds.

When you are making bread you do not want to introduce air into the mixture, you simply want to mix the ingredients together. A flat beater attachment is sort of an all-purpose attachment and it will be used for everything that is not handled by the wire whisk or the dough hook. If your recipe does not call for high-speed whipping and it is not a super heavy bread dough than the flat beater attachment at medium speed will do the job.

Earlier we mentioned that a mixer with more speed settings will give you added versatility. When you are mixing different recipes your recipe may call for a certain speed but a machine that offers you a lot of versatility when it comes to speed choices is very important.

For example, if you are making bread and you are using a slow speed but the ingredients are just not being mixed well enough you might want to increase the speed just a little bit to help mix you are ingredients thoroughly.

If you are trying to whip some egg whites to get them nice and fluffy, using a speed setting that is too high can actually make a mess and send your ingredients flying all over the place. In that case, it would be a good idea to slow the speed down just a little bit. A mixer that only offers you three-speed settings doesn’t give you the opportunity to fine-tune the mixing process to get the best results.

So to answer the question, does stand mixer speed matter we would have to say that yes it does. Not only is the proper speed very important for the various recipes you might be making but having a lot of different speed settings will also give you the versatility you need to mix things thoroughly without making a mess.