Offering a high quality and affordable appliance all in one unit, the Hamilton Beach stand mixer can handle the toughest of mixing jobs. It has a unique process for mixing, with the head orbiting around the bowl while the beater is rotating the opposite way. This blends ingredients faster and more efficiently. While this mixing is going on, the bowl is locked onto the base for stability. Everything stays in place when this machine is mixing at a high speed. The mixture and the bowl are easily accessed with a head that quickly releases. Included with this product is a pouring shield, bowl, base, whisk, dough hook, and a flat beater. It also comes with a user manual that included tasty recipes. 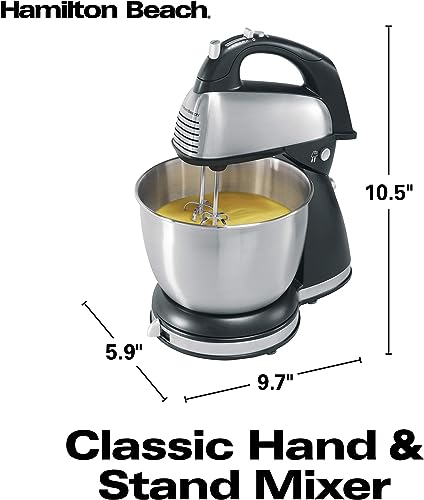 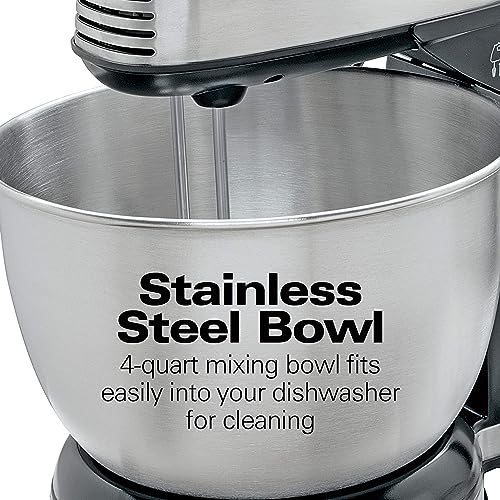 The Hamilton Beach stand mixer has received very poor reviews with an overall rating of only 2.5 stars out of 5. There are several complaints about this mixer from users regarding different aspects of it. One of the problems with this mixture is its inability to mix efficiently. One reviewer said that it wasn’t able to properly mix ingredients when it was set on automatic and she had to use the product as a hand mixer instead to get the job done. The user went on to say that it was very hard to remove it from the stand and then put it on again.

One other reviewer states that quite a bit of the batter is missed when the whisk attachment is used and that the ingredients are not properly mixed. Many other users say that they have problems with the dough hook as well. Other users complain that the flat beaters don’t work at all. The general complaint is that the flat beaters along with the whisk only end up pushing around the ingredients instead of blending them. Another common complaint amongst users of this Hamilton Beach stand mixer is that while its mixing, the bowl spins.

Another user added that she has to deal with puffing flour and batter that splatters because the machine starts at a fast speed and causes a mess. With the reviews that have been given thus far, we do not recommend this product at all. It is quite clear that most consumers believe that the quality is quite low on this mixer, and regret having purchased it. There are consistent reports about its poor performance and too many things not working properly. This is not a good investment to make in a stand mixer and chances are that anyone purchasing this product will be disappointed in its functionality and durability.

We recommend looking for a mixer with higher customer satisfaction to avoid disappointment.