If you want to create frothy milkshakes and malts that transport you to the days of saddle shoes and sock hops, the Hamilton Beach Classic DrinkMaster is an appliance that can act as your time machine. Since Hamilton Beach has been making drink mixers since 1911, it’s entirely possible that the soda jerks of your childhood were using a machine very similar to this one. 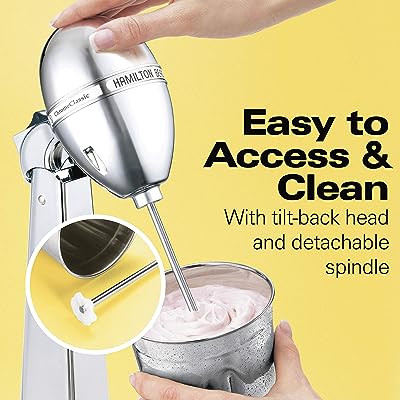 In addition to its retro design, the DrinkMaster offers both traditional and modern features. The DrinkMaster comes in either white or chrome and at 14 ½ inches tall, it can be stored under most kitchen cabinets. The mixer’s easy to clean spindle delivers 70 watts of power which are capable of blending the thickest milkshakes.

During mixing, the included 28-ounce stainless steel cup is filled with ingredients, placed over the spindle, and rested on a ledge. With two speeds and a tilting head, the machine is easy to use and makes anyone feel like a professional soda jerk.

Even though this mixer will make you perpetually crave a milkshake, it is a versatile appliance with many uses. With a little imagination, this mixer can make everything from protein shakes to blended cocktails. Since the stainless steel cup is so easy to clean, you may find yourself using this mixer for every meal.

In reading over a hundred reviews of the Hamilton Beach 727W/730C Classic Drink Master, we found that opinions on this appliance run the gamut and often contradict. Since the mixer’s list price is $45, many reviewers felt that they got their money’s worth and enjoy using the machine. On the other hand, a comparable number of reviewers were frustrated with the mixer’s performance. On average, the mixer scored a user rating of 3.5 stars out of 5. 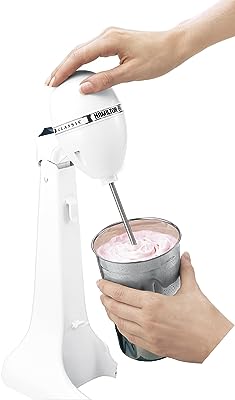 A major complaint resulted from the fact that this appliance is made from plastic, while previous generations were made from die-cast metal. As a result, reviewers warned that the machine is not well weighted and can easily tip when the mixing cup is added. Reviewers were especially annoyed that the spindle, which is responsible for mixing, is made out of plastic as well. As a result, the mixer is not able to crush ice or blend solidly frozen fruit.

Users that attempted to use the mixer on solidly frozen ingredients often burnt out the motor, broke the spindle, and were generally unhappy with the mixer. As one reviewer pointed out, it is important to read the instruction manual, which notes these limitations and offers ways to work around them to make an excellent drink. Given the very low price, many users accepted the plastic as a necessary evil.

Another area of controversy between users involved in the machine’s power and use. A few of the more positive reviewers said they were surprised by the amount of power generated by this mixer. However, many more reviewers complained that the mixer was not capable of mixing thick ice creams and instead simply “drills a hole” in the ingredients. Many became extremely frustrated with the machine at this point, while others experimented with agitating the cup while mixing and had better results. As one reviewer explained, it is important to use this mixer like you would a hand-held stick mixer and move the cup while mixing. While this is not a fully automated appliance, many users felt like that was an aspect of its nostalgic charm.

Ultimately, the  727W/730C Classic DrinkMaster is a great and affordable Hamilton Beach mixer when used properly. If you are looking for a fun, classic appliance and are willing to work around its limitations, you will probably enjoy having this mixer in your kitchen. However, if you want something more durable and professional, it is worthwhile to invest in the heavy-duty Waring PDM1 drink mixer. We recommend this low-cost drink mixer to anyone who wants great malts and milkshakes without breaking the bank.