The Hamilton Beach CPM700 Commercial Stand Mixer exceeds the expectations while offering a sleek, die-cast metal design and a generous 7-quart capacity. Its 800-watt motor, operated by rugged all-metal gears, offers consistent power and torque on even the stiffest doughs.

The rotating speed dial allows for precision control to get the perfect mix, without spilling, every time. The machine’s low center of gravity decreases vibration and at just over 15 inches tall, it can be easily slid back under most cabinets.

Safety is a primary feature of the CPM700 stand mixer. The recessed power button is separate from the speed control and makes accidentally triggering the machine practically impossible. Additionally, overload protection is built-in to protect the motor from overheating or burning out.

The most unique safety feature of the CPM700 is the automatic power shut-off that prevents the beater arm from operating when tilted up. 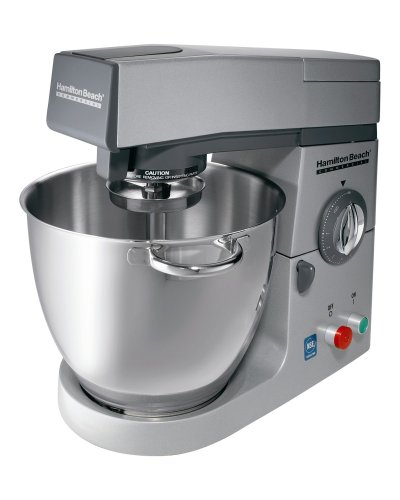 Despite the large 7 quart capacity, the three included attachments maintain complete bowl coverage and make sure all ingredients are thoroughly mixed. The whisk attachment is designed in a balloon shape to incorporate as much air as possible into your meringue without over-beating.

Most jobs, from meatloaf to cookie dough, can be performed in record time by the flat beater. For tougher jobs, the dough hook has enough muscle to knead even the stickiest bread dough. Simply put, this mixer has the strength and the tools to take on any recipe.

In surveying customer reviewers, we found that owners of the Hamilton Beach CPM700 are wowed by the power and capacity of this mixer and happily rate it with an average of 4 and a half stars out of 5.

Reviewers appreciate its large capacity and find that the generous 7-quart bowl size lets users confidently make larger batches than they ever would have attempted before. Reviews also claim that the mixer does not shy away from any job and simplifies all of their cooking and baking. One reviewer commented that thanks to this mixer, she’ll never have to soften butter again. 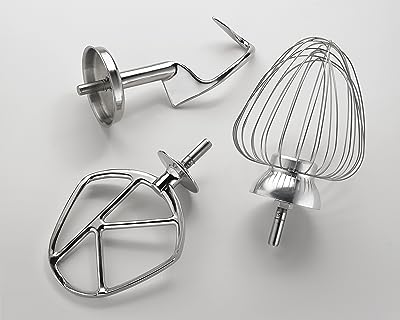 Some of the best-loved aspects of the CMP700 are the built-in fail-safes. Several users said that they enjoy the smoothness of the rotary speed dial, which offers complete control of the mixing rate.

The automatic cut-off switch has prevented more than one reviewer from spilling flour on the counter-top and floor. On the other hand, some reviewers found that having to push multiple buttons to start the machine was clumsy and awkward.

Several reviewers were impressed by how lightweight this mixer is, despite being such a powerful, well-built machine. Since the machine is so lightweight, many reviewers chose to easily store theirs in a large cabinet in order to save countertop space.

It is important to note that there were a few contradictory reviews about the lifespan of the mixer’s motor. Most users find that the CMP700 exceeds its expected lifespan, even under constant or frequent use. A very small percentage of owners experienced issues with the motor function while still under warranty, but reported good experiences with Hamilton Beach Customer service offering a replacement.

Another complaint stemmed from the difficulty of finding additional proprietary attachments such as a meat grinder and pasta maker attachment for this machine, despite having the proper power outlets.

If you foresee yourself wanting your mixer to double as a pasta machine or food processor, but don’t need as much capacity, you may want to consider the Viking VSM500 Professional 5-Quart Stand Mixer, which offers similar power and a wide range of optional accessories.

However, if you’re primarily seeking a well-made mixer with excellent safety features, we believe the Hamilton Beach CPM700 Commercial Stand Mixer is worthy of its 4.5-star reputation and is an excellent buy.