The KitchenAid Artisan Custom Metallic KSM152PS Series Stand Mixer adds a glistening prominence to your kitchen, with power and capacity to handle all your mixing, whisking, and blending needs with ease. The 5-quart bowl of this Artisan can easily handle the largest batch of cookies.

It comes equipped with a high-performance 325-watt motor with 10 speeds for versatility when mixing. Its all-metal construction is sturdy and durable, the same as the powerful KitchenAid professional 600. Optional attachments (sold separately) can transform this mixer into a jack-of-all-trades in the kitchen, everything from citrus juicing to sausage stuffing. However, this mixer is heavy and it is best to find a permanent home for it on the counter. 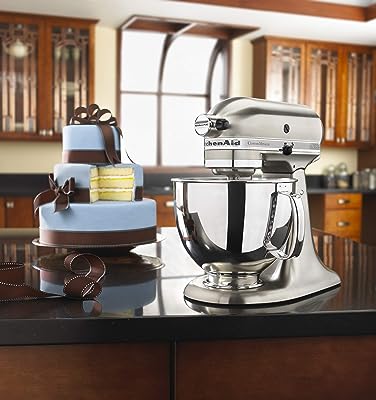 When we researched the KitchenAid Artisan Custom Metallic KSM152PS Series Stand Mixer we were able to find eleven reviews giving the mixer 5 out of 5 stars. The reviews were all positive; in fact, not one reviewer had any real problems with the mixer. Negative aspects were primarily personal preferences that highlighted no design flaws with the mixer itself.

One reviewer claimed they had their previous model for almost 30 years before purchasing a new one. He claims the mixer works exactly as advertised and he expects to get another 30 years to use out of this one. Another reviewer commented on the ice cream maker component, which she purchased separately, stating it worked well and was a lot of fun. She indicated she might be interested in buying more components to increase her use of the mixer. The components are easy to snap in and out with the tilt-style head of the mixer.

The only complaint we were able to find was that one reviewer did not like how the pouring shield worked; so she just added ingredients without it. She did not indicate she had any issues with splattering or difficulty getting the ingredients to mix up without it. This seems like a very mild issue and more of a personal preference than any sort of design flaw, as no one else mentioned having an issue with the pouring shield.

Another comment that could be taken as a negative was a comment made by one reviewer stating the mixer was expensive. However, the reviewer did not phrase this in a negative way, she seemed to just be stating a fact. She went on to praise the mixer as a powerful mixer able to do whatever she needed; the implication being she was viewing this purchase as a long-term investment.

After reviewing all of the glowing reviews we feel very comfortable suggesting this product to consumers. There was not a single negative review about this product, no design flaws, or individually faulty units reported. By all accounts, the mixer is easy to use and is an ideal personal use machine.