In my kitchen, I have 4 stand mixers, but my favorite one (for four years till now) is KitchenAid Artisan. It has been one of the best appliances in my kitchen- ever- and I use it so often, with the same articulate results time after time. It’s so amazing that there are more than 20 different colors to choose from. I really love a colorful kitchen so I decided to purchase the empire red one. 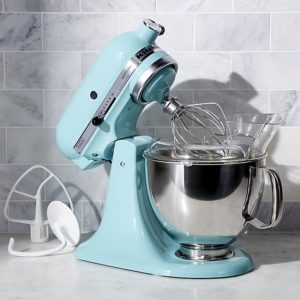 Which I think first is bowl size

This mixer is equipped with a nice 5-quart stainless steel bowl. My kids love pizza and cookies, I have to bake at least once in 2 weeks (enough use for whole 2 weeks). This bowl is large enough for me to use for my family without any trouble, and I could easily fit more inside than what I do. What really appealed me to the stand mixer was the fact that you can mix the dough for as many as four loaves of bread of 4 dozen cookies at once! There are handles on the bowl and I must say that I appreciate them greatly. The handles make it easier to hold the bowl in place and to remove it when the time comes. And, since it is rust-resistant and dishwasher safe, there’s even more to love.

The second thing is always its performance

As far as performance goes, this stand mixer never ceases to impress me. It features 59- point planetary mixing action. This is the average of stand mixers and there is a reason why: it ensures that your batters and dough are always mixed thoroughly. Nothing is worse than pouring your batter into its container only to find out that it is not well mixed. I have had this happen in the past and trust when I say it is not cool at all! That is not anything that is of concern these days, though, and it is all with thanks to this awesome Artisan blender.

It’s also really powerful. The mixer has 325 watts of power for easy, breezing and simple mixing. It doesn’t matter what goes in, the Artisan gets the job done with simplicity and ease. It is pretty nice because some blenders fail miserably when it is time to mi some batters. Not a problem for the Artisan. It does its job and keeps on going, ready for more and more.
The blender features 10-speed settings. This is enough to mix just about anything that you have in mind to prepare. And, thanks to the tilting head, it is easy to get all of those ingredients inside of the bowl with ease. The settings and the tilting head are both easy to work, so don’t worry about encountering an outer space design that takes months on end to figure out how to use. This bad boy is simple, yet anything but standard. It is pretty incredible! 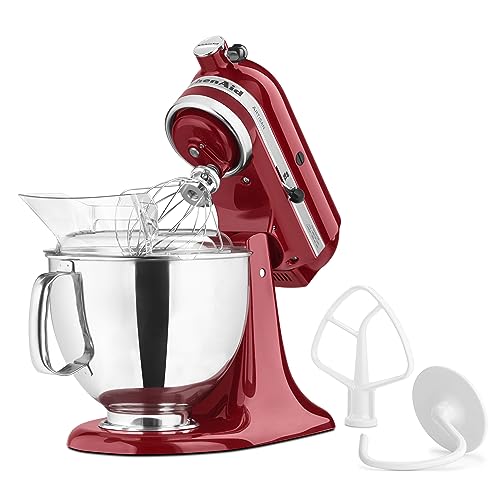 Anything that makes it easier in the kitchen is a winner in my book. This is exactly what stand mixer attachments do –they make it easier in the kitchen. Even better, they also eliminate the need to have multiple appliances sitting on the countertop (and alleviate wasting your hard-earned money.) Several attachments are included with the stand mixer, and tons of others are also available for purchase. Thee attachments make this a truly versatile machine that does so much in the kitchen. Remember I said that I use this mixer more than any other? It is these helpful attachments that really make this possible.
Three are 12 attachments available for optional purchase. There is a pasta maker, which happens to be a personal favorite of mine. And then there is the cheese grater which is also nice. And, there are 10 there also available. The attachments included with the stand mixer include a dough whisk, a dough hook, a flat beater and
The pouring shield is a personal extra that I really like. This splash guard fits over the bowl and prevents messes from hitting the countertop or the floor (or even your blouse, not that I have any personal experience with this happening, wink, wink.)

How about its price?

You might think that it has a pretty expensive price tag attached, seeing as that it is a KitchenAid product and one that is so durable and high-quality. But the truth is, I am not one willing to spend an arm and a leg on an appliance and this one is very reasonable. I bought my mixer on Amazon, where I found the lowest price after comparing. I also received free shipping.
There is a 1-year warranty accommodating this stand mixer. Although it is made to last so you’re unlikely to use it, knowing that you have that protection is very valuable.

So is it a perfect Stand Mixer?

I never said that it is perfect, but it is near it perfect and one of the best stand mixers that I have ever had the pleasure of using. There are just a couple of disadvantages that I have found while using the mixer and those are nothing too major and nothing that affects my love of the mixer. One of the disadvantages is that it is one of the heavier stand mixers and a second is that it does take up a great deal of space on the counter. You will want to find a place to put this and leave it there! Or most people like myself; however, these are not things that make it any less than an awesome stand mixer!

Anything else important to know?

I have told you all of the great things about the Artisan and even the things that I do not like. But before I leave you, there are a few more pieces of information that I want you to know about this stand mixer. These details make it easier to purchase the Artisan without hesitation. Without further delay, here’s that info!
I am not one that enjoys sanding over a sink full of dishes, nor do I find it pleasurable to scrub until my wrist hurts. This is a stand mixer that can easily be cleaned any time there is a mess. You only need a damp sponge or cloth to do this. And, the bowl and attachments are safe to toss into the dishwasher so there is one less thing for you to worry about. I definitely like the fact that this isn’t a stand mixer that is a big headache to clean.
The Artisan has received the Good Housekeeping Seal of Approval. If you know anything about the GH seal, only the best of the best make the cut. The researchers at GH put the product through rigorous testing to ensure that it meets al o your expectations. With its inclusion on the recommended GH products, you gain even more confidence in your product than what you had before. I really love that I have a product that Good Housekeeping experts are using!

Users of the Artisan think highly of the appliance. Tons of reviews are available at no cost on the web and I urge you to go take a look at some of them. There are very few with anything negative to say about the Artisan! This stand mixer really rocks; I’m trying to tell you! These reviews prove it. I used them before I made my purchase because they really come in handy. There is a lot of information to prying from these reviews and they say so much. Check them out and you’ll learn that most people that use the Artisan feel the same way as me and love their machine.
And…
It isn’t hard to tell that I love this stand mixer (what’s the count on the word ‘love’?) and recommend it for anyone that is seeking an affordably priced, quality machine that is versatile and totally capable of getting the job done. My life in the kitchen has changed dramatically nice I purchased this stand mixer a couple of years back. My family has even complimented my foods more now that I have been using this machine. That puts a smile on my face, you know 🙂
The Artisan is a stand mixer that is not going to disappoint you and one that isn’t going to need to be replaced any time in the near future. It is made to please and it does not fail. It beats whips and mixes like a pro and is large enough to accommodate most users. At the cost, there is no better stand mixer you can buy! It has tons of features and functions and definitely makes it easy for you to whip up your faves in no time at all.