This KitchenAid KSM75WH Classic Plus 4.5-Quart Stand Mixer is the ultimate tool for the average kitchen. With ten speeds to choose from and three different components included, the mixer is ready for everything from heavy cream to bread. The unit’s locking tilt-head allows for easy removal of the components and access to the bowl. All components are dishwasher safe and easy to remove and clean. 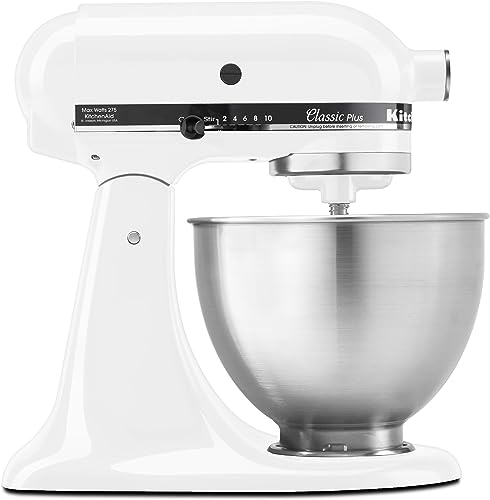 When researching the Kitchen Aid Classic Plus Tilt-Head Stand Mixer online we found 28 reviews giving the product 4.5 out of 5 stars. The reviews were mixed; despite the majority of strongly positive reviews, there were several that highlighted major flaws.

Most reviewers agreed that the mixer was easily cleaned, and no one had a problem with residue building upon the parts. One reviewer even went so far as to claim the mixer is “so easy to hand-wash I haven’t bothered putting its components through the dishwasher.”

One of the most prominent components of the reviews was how rugged and long-lasting the mixer was. One reviewer had hers for 30 years, and it was still in good working order.

Though, more commonly the mixer in question was somewhere between 1-5 years old and still in good working order.

Another common thread in the positive reviews was the strength of the engine in the mixer. One reviewer claimed the mixer’s “powerful engine can handle anything I throw at it”.

Most reviewers agreed it did an excellent job of mixing up small amounts of thick bread dough. It did “hop” a bit while doing it but none feared it would fall off the counter, as it is quite heavy at 27 pounds.

The negative reviews complained of several design flaws that hampered their ability to use the mixer effectively. The most common being the weight and the splattering issue. One reviewer said the mixer “already weighs as much as my microwave”. While most agreed this kept the mixer relatively stable, they also thought it made it difficult to put away and take out.

The splattering issue went hand in hand with the complaint of the bowl’s top being too narrow to pour into while mixing. Most reviewers agreed that this was a major inconvenience, as they had to spend about another $30 on a splatter guard to use the mixer to its full potential. The narrow bowl top also prevents the use of a spatula while the beaters are working, something a few reviewers found frustrating.

Another common complaint was that the engine was likely to overheat if left on too long and the gears could not handle a large amount of bread dough. One reviewer said that her daily use of the mixer for bread dough wore out the gaskets in about 6 weeks. In a more moderate review, the reviewer stated this machine was not intended for commercial-style use and that personal use was easier on the components and gears.

The most negative review pertained to a leaking seal in the mixer shaft. This reviewer claimed that her mixer would leak oil into the bowl and that when she contact KitchenAid she was informed this was a common issue and to use the mixer more frequently to avoid the problem. This seems like a rather serious design flaw to brush off, leaking oil into the bowl where food is mixing could pose a potential health problem.

Overall the KitchenAid Classic Plus Tilt-Head Stand Mixer seems like a decent choice for the personal kitchen. While there were some complaints as to the engine power and splattering issue, these were far outnumbered by the positive reviews, which did not mention them. However, the issue with the oil leak is enough to give us pause, this seems as though it could be a serious health issue; if this is truly a common problem, as the reviewer claimed, we can only suggest you buy this product if you plan on using more than once a week.