The KitchenAid Pro 450 KSM450 Series 4.5-Quart Stand Mixer is a sturdy all-metal mixer that is ideal for the home kitchen. Designed for easy cleaning, with a bowl lift stationary head style; it incorporates the efficiency of the pros use. The 4-½ quart stainless steal-mixing bowl can handle up to 8 cups of flour and has a handle for easy lifting. Unique 59-point planetary mixing actions ensure an evenly mixed batter. This mixer comes in imperial black and empire red, ensuring it will look classy in any kitchen. 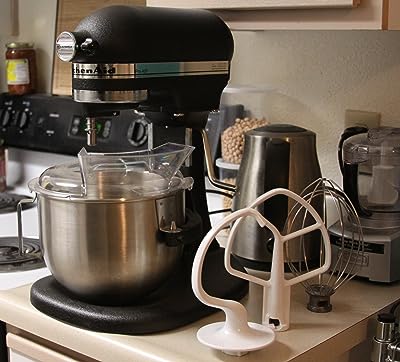 The same as KitchenAid pro 5 plus stand mixer review, we researched the KitchenAid Pro 450 KSM450 Series 4.5-Quart Stand Mixer online and we were able to find 10 reviews giving the mixer 4 ½ out of 5 stars. The reviews were overwhelmingly positive with only one reviewer making any substantial complaint. The reviewer in question seemed to have a problem with an individual unit, not so much the mixer on the whole.

Most reviewers reported loving this mixer, stating that it worked well. One reviewer stating that his wife loves her mixer and “whatever makes her happy makes me happy.” Apparently, everyone is very happy in that home.

There were no complaints about the mixer being difficult to clean or any gunk building upon it. The only thing to keep in mind was brought up by a reviewer, the components are not dishwasher safe, and putting them through the dishwasher will ruin them. However, most reviewers did not seem to be bothered by this and just avoided putting the components in their dishwashers. There were no complaints about the bowl lift feature making it difficult to clean or remove the bowl. One reviewer even went out of her way to praise the bowl lift feature, claiming it was easy to use and efficient.

Several reviewers praised this machine’s power and ability to handle double loads of cookie dough. Bread dough was also reported to not be a problem for this machine, it easily handled up to two loaves worth of dough. Reviewers also praised the machine’s ability to do this while mixing evenly and staying relatively quiet.

The optional components sold separately were also reported to work well. One reviewer stated she and her husband had purchased the meat grinder and sausage stuffer attachments and they loved them. Several other reviewers agreed that this machine was versatile and functioned beautifully with the optional attachments.

One reviewer stated that his mixer suddenly stopped working after only about 5 light uses. This reviewer was upset and annoyed with this malfunction and equally annoyed by the level of customer service he received. He claimed that KitchenAid did not offer to replace his faulty mixer but instead suggested he mail it to them so they could come up with a repair estimate. He was frustrated by this and decided against it, stating he thought the mixer was too expensive for this level of customer service and quality.

The only other negative review is more of a warning not to let your children play with your mixer components. One woman stated that finding replacement parts for this mixer was difficult and rather expensive, as she had to replace a beater that her children lost. She stated she loved the mixer and wanted to find a replacement part as soon as possible as she could not imagine her kitchen without it.

After going through the reviews we feel reasonably comfortable suggesting this product to consumers. The majority of the negative reviews were either unit specific or due to children losing components. We feel that this mixer is a good product for the price and is a good addition to any kitchen, just do not let your children play with the components.