It’s the top of the line for Kitchen aid in my opinion. You can crank it up with heavier bread doughs, the worst that can happen is the bowl will jump around a bit. It’s worth the money and very durable.

If you’re thinking of investing in the KitchenAid stand mixer but would like to read more reviews of the Professional 5 Plus Stand Mixer KV25g0x  first, this in-depth review may help you arrive at a decision. In the next few minutes, you’ll discover the main features of this product, how well it performs, a quick glance at its pros and cons, general customer feedback, and whether or not this device would make for a great purchase. The KitchenAid Professional 5 Plus KV25GOX Series Stand Mixer Review is designed to handle up the 6 loaves of white bread, 7 pounds of mashed potatoes, and 10 dozen cookies. Perfect for the small business or big family. The easy turn lever raises the bowl up and down into and out of the mixing position, the five-quart bowl has a wide top for ease in adding ingredients. And the elliptical stirring action mixes the batter evenly and efficiently.

When researching the KitchenAid Professional 5 Plus KV25GOX Series Stand Mixer Review online we found 130 customer reviews award the machine a 4 out of 5 star rating. Despite the high star rating the majority of reviews, even positive ones highlighted some severe issues with this mixer.

Most reviewers agreed, even those with negative reviews that this machine was easy to clean. The components snapping in and out easily and were dishwasher safe. Not one review complained of gunk build up anywhere on the mixer.

The majority of reviewers also agreed that the machine is powerful, and does not “hop” even when mixing thick bread dough. The slow start feature, which minimizes splatter, was also a favorite, along with the wide topped bowl, allowing ingredients to be added easily. Several reviews spoke of the bread-making prowess of this mixer, stating that for the bread maker it is a must. One reviewer loved her mixer so much she stated it had only one drawback “just one beater to lick clean”.

However, the good reviews ended there. Several reviewers complained that the machine sprayed paint chips or metal chips into the bowl while mixing; one reviewer even had a problem with oil leaking into their bowl while the machine was in use. These reviews often went hand-in-hand with complaints that the motor overheated and started to smoke quite easily. Not only is the issue of the paint and metal chips unappetizing it is dangerous, particularly the metal chips, which could cause serious health issues.

A huge amount of reviewers also complained of poor customer service on the side of KitchenAid, often ending with a refusal to assist the customer. There were also many reports of motors and/or a gear breaking just after the one-year warranty was up. Many more reviews even complained of the machine breaking, usually the motor or gears, within a few months of use, even with lighter use than it was advertised to be capable of. Even reviewers with positive customer service stories still had to send back mixers for new ones or replace parts relatively early in the life of the mixer, in most cases before one year of use was up. 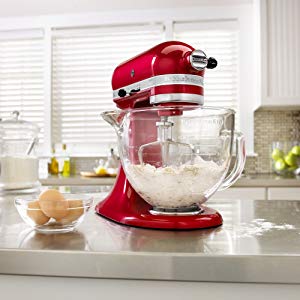 Another common complaint was about the elliptical orbit mixing, one reviewer complained this just scratched up her bowl and threw it from its pins, rather than mixing the ingredients evenly. Another complained that it caused a huge mess in his kitchen “just as you’re about to pour something into the mixing bowl, the head comes around and hits the cup & sends flour all over the counter, floor, everywhere…except the bowl.” While plastic guards are sold to eliminate these issues the majority of reviewers felt for the price they paid they should not have to purchase costly accessories for it to work properly.

In general, this mixer seems to have more problems than good points, and for the price of this mixer, one would expect much better. The paint and metal flakes falling into the bowl while mixing is an unacceptable and health-hazardous design flaw. There were also several reports of the mixer being simply too tall to fit under the standard cabinets in a house. Taking these reviews into consideration with the complaints of poor customer service and the early death of these mixers, we cannot suggest you buy this product.

Consumer says about Pros and Cons