Those who are looking to simplify their cooking and baking without the expense or frills of most stand mixers may want to consider Sunbeam products. The durable die-cast retro styling of the Heritage series is a testament to the company’s long history in American kitchens.

The Sunbeam 2346/2347/2349/2351 features a dual motor that provides 3-way mixing. One motor spins the beaters, while the second motor simultaneously turns the stainless-steel bowl around the off-center beaters for an even mix. The mixer and attachments are built to be both durable and easy to clean. Its body is made of die-cast metal and available in three finishes including white, silver, and charcoal.

The included bowl, the beater, whisk and dough hook attachments are heavy-duty stainless steel. The beating arm is set off-center to give you room to add ingredients. If you need more access, simply tilt the beating head up and lock it into place.

With 12 variable speeds featuring a smooth start function, ingredients are prevented from being launched out of the bowl. Unlike many stand mixers, a bowl size selector feature allows this mixer to accommodate both the large and small bowls that come included.

At its exceptionally low price, this mixer is a bargain for those who are looking for a simple mixer that is as easy to use as it is stylish. 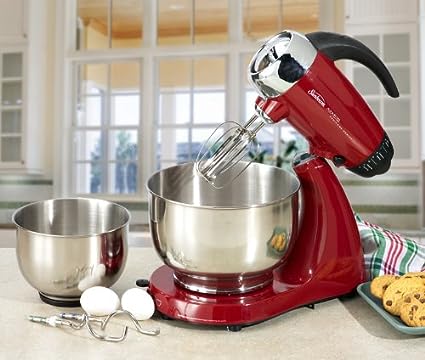 In researching several dozen reviews, we found that there are a lot of contradictions surrounding the Sunbeam 2349 Heritage Stand Mixer. Some reviewers were quite happy with their mixer, while others gave it the lowest rating possible. On average, the mixer scored a user rating of 3 stars out of a possible 5.

Reviewers couldn’t deny the affordability and simplicity of this mixer. Many were charmed by the familiar retro design. Several appreciated the off-set design of the beaters and liked how it allows enough space to add most ingredients without stopping the mixer. However, some users found it difficult to use the off-set beaters mix small amounts of ingredients, like a single egg.

A major complaint resulted from how loud the machine is when in use. Several reviewers attribute this to the secondary bowl motor, which is responsible for spinning the bowl and prone to burning out. Reviewers complained that the bowl only rotates in one direction, can not be turned off, and felt rather flimsy. Even though two bowls are included, one reviewer noted that it’s vital that the bowl size selector is switched or the mixer will not get a proper mix.

Several complaints resulted from poorly performing features. Despite the variety of 12 speeds, many reviewers complained of excessive splatter without the option of a splatter-guard. Additionally, several users took issue with the stiff, hard to press buttons and do not recommend this mixer to anyone with arthritis. Even though dough hooks are included, some reviewers found that 2349 would not stand up to serious bread kneading or larger batches.

However, the most serious, repeated complaint involved primary motor burn out and stripped gears. Many reviewers were furious that, although the exterior of their mixer was made of metal, the internal parts, such as the gears, were plastic. Many disgruntled reviewers retorted that the machine only appeared to be durable when in reality, the motor was not built to outlast a year of use.

Ultimately, if you are looking for a very affordable, attractively designed mixer to perform the occasional, light tasks, you may be satisfied with the Sunbeam Heritage Dual Motor stand mixer. However, with so many negative reports about motor durability, it stands to reason that recent mixers by Sunbeam may not live up to the reputations of their predecessors. Budget-conscious shoppers should proceed with caution and consider investing in a more powerful mixer with overload protection.