The Sunbeam 2350 is a part of the classically-styled Sunbeam Heritage Series. With its retro-chic design, this mixer reflects the role that Sunbeam mixers have played in kitchens for generations.

By adding modern features to the traditional design, Sunbeam has brought the Heritage series into the new era. This mixer houses 350 watts of power in a die-cast metal enclosure, but only weighs 13 pounds. It features two motors, one in the tilt-down arm and another in the base which keeps the bowl spinning. The motors work in tandem, responding to the rotary speed dial which controls the mixers 12 variable speeds. 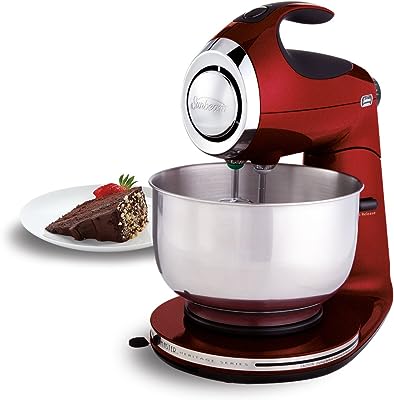 A unique feature of the Sunbeam Heritage line is the ability to accommodate more than one bowl size. The bowl size selector in the base allows the mixer to adjust from the included 4.6-quart stainless-steel bowl to a smaller bowl, which is sold separately.

In addition to the large capacity bowl, 2350 comes equipped with stainless-steel beaters and dough hooks so you can start mixing immediately.

There are dozens of mixed reviews about the Sunbeam 2350 that span from pleased to scathing with little middle ground. Since the user experiences were exceedingly contradictory, the reviews can be confusing. While some users were pleased with the money saved on this affordable mixer, many unhappy users wish that they had paid more for a mixer that performs better. On average, the user rating balances out to 2.5 stars out of a possible 5.

On the positive end of the spectrum, reviewers appreciate how quietly this good-looking machine operates. Users who had positive things to say about this mixer mostly used it for light uses and rarely experienced any issue. However, there were many reviews from disgruntled owners who attempted to make a single loaf of bread with the supplied dough hooks and burnt out the motor. One reviewer even claimed that the mixer bogged down and came to a grinding halt when mixing a simple batch of sugar cookies.

Many purchased this product because they had owned older Sunbeam mixers for upwards for 25 years before purchasing 2350. However, more than one exasperated reviewer wrote “they just don’t make them like they used to.”

In addition to the low-cost appeal, many purchasers were attracted to this mixer for the durable metal appearance of this mixer. Although the exterior of the machine is metal, many reviewers were upset to find that the gears in the motor were made of easily stripped plastic. Many annoyed users found that the beater head became hot to the touch, while others experienced the motor locking up completely within a year of ownership. Several reviewers replaced their burnt-out Sunbeam mixers under warranty with the same model, only to experience the exact same problems a second time.

Ultimately, the mixed and contradictory reviews of the Sunbeam 2350 Heritage Stand Mixer make it difficult to determine the product’s quality. Although its price and appearance are alluring, the reports of motors burning out or seizing within a year are worrisome. Unless you plan to limit your mixing to very light applications, this mixer may cause a lot of aggravation. Instead, we recommend considering the unique, space-saving Bosch MUM44005 Compact Mixer or the versatile Cuisinart HSM-70 Hand and Stand Mixer. Alternately, if you plan to make large batches, it may be worthwhile to invest in a more durable stand mixer such as the Cuisinart SM-70 or Kitchen Aid Artisan.