The Sunbeam 2371 Mixmaster Stand Mixer offers a wide array of features while costing well beneath the $100 price point. It boasts a generous 350 watt motor with 12 variable speeds, which are adjusted by a rotating dial. To prevent against clouds of flour or splattering batters, every speed features soft start technology that eases the mixing of ingredients.

The mixer has a few clever design features to simplify your baking and cooking even more. The beater arm is off-center to keep manual scraping at a minimum and to allow easy addition of ingredients, even while in use. When you need to access the bowl, the head tilts back and locks in place. Additional controls are located on the top of the soft, ergonomic handle.

Even at this low price, the Sunbeam 350-Watts Mixmaster includes beaters, whisks, dough hooks, and two glass bowls. The option of having two bowls provides a lot of flexibility. You may choose to chill or microwave ingredients in one bowl while mixing in the other. Many brands do not offer glass bowls due to their fragility and weight, but if you foresee yourself needing to microwave your ingredients, a non-metal bowl has unique advantages. The included glass bowls are one of the distinct features of this particular model and an uncommon standard accessory in modern stand mixers. 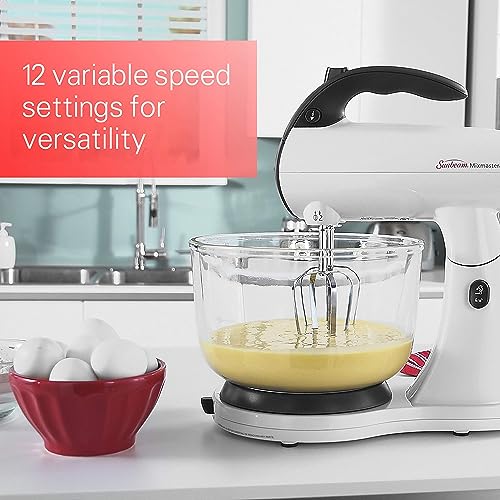 There are several dozen online reviews of the Sunbeam 2371 Mixmaster. While reviews were varied and often contradictory, the majority were quite positive and earned the mixer an average user rating of 4 stars out of 5.

Many reviewers felt that they got their money’s worth. Budget-conscious reviewers are pleased to have found a stand mixer with several of the features of the most expensive brands. Reviewers like the roomy, easy to clean glass bowls, which allow them to see how well ingredients are being mixed. One reviewer wrote that she liked how much space there was between the mixing arm and the bowl, adding to its accessibility. Another favorite feature was the ability to rotate the bowl along its base while using the off-set beaters.

While some bought the mixer specifically for the glass bowls, other reviewers found them heavy and cumbersome.

An example of the contradictory reviews involved the design of the mixer’s enclosure. As with other Sunbeam mixers, reviewers like the nostalgic design, but a few were upset that the casing on this model was plastic rather than metal. On the other hand, some appreciated how light-weight the mixer was compared to metal models. There were problems, however, with the plastic parts. A few reviewers complained that pieces, which were intended to hold the bowl in place, broke off from the base. The plastic buttons were also mentioned as being difficult to press and use. A few reviewers experienced the attachment eject button breaking while the beaters were locked into place, rendering the mixer useless. 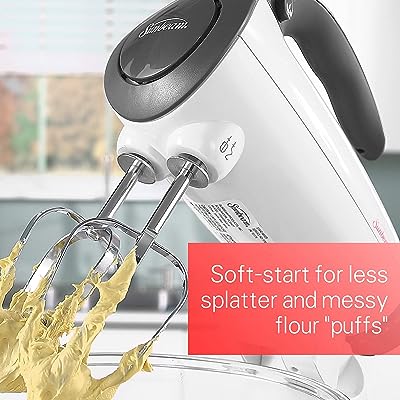 Another contradiction in opinion involved the included attachments. In addition to the glass bowls, reviewers largely liked the included attachments. One reviewer said that the shape of the beaters is easy to clean and does not give the batter anywhere to hide. Another reviewer loved her machine but found that the beaters were fragile and had to be replaced. While most users appreciated the 12 speeds and the soft start technology, a couple of reviewers did comment that, if left unsupervised, the mixer is likely to splatter ingredients, even on the lowest speed.

Ultimately, this mixer appears to be powerful enough to handle most jobs. There were reports of motor burn out, but mostly on tripled batches or heavy bread dough. If you’re interested in making large batches of bread, it may be worthwhile to pay more for a more rugged machine.

However, if you’re looking for a very affordable mixer for basic uses, we believe that the Sunbeam 2371 Mixmaster is an excellent deal for the price. We happily recommend this lightweight mixer to anyone who needs a stand mixer for average use and recipes that do not require too much muscle.