The Sunbeam 2594 Mixmaster costs less than $100, but boasts an impressive 350 watts of power and 12 variable speeds. The wide array of speeds is controlled by a rotary dial and features slow start technology to prevent flour clouds. With so many speeds to choose from, everything from quiche to meringue is sure to be mixed to perfection. Even at such a low cost, this mixer offers all the basics and a few nice features as well. A durable 4 quart stainless steel bowl comes included. If you purchase an additional smaller bowl, the bowl selector switch at the mixer’s base allows the mixer compensate for the size change.

For an even mix, the included stainless steel beaters and dough hooks feature a small plastic disk that helps the bowl rotate with the mixer. The off center beater arm allows for the easy addition of ingredients, even while in use. When more access is needed, simply unlock the tilting head and lock it in the up position. When finished, the mixer and accessories are a breeze to clean and lightweight enough to store in a cabinet. 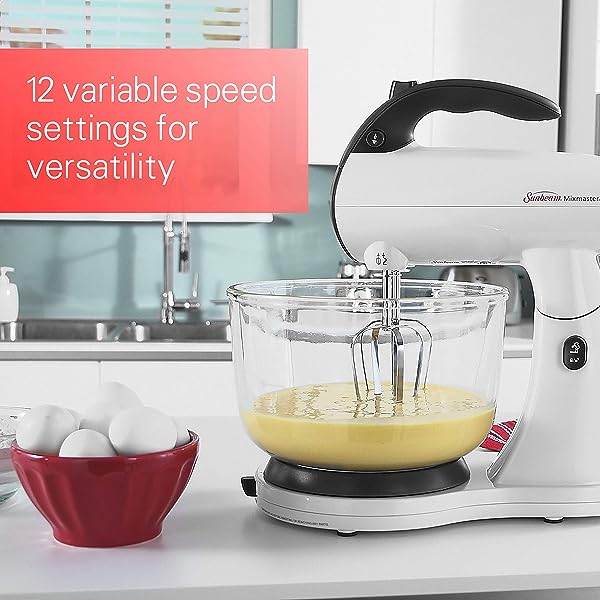 In researching reviews of the Sunbeam 2594 Mixmaster, we found that reviews were rather mixed with the majority being adamantly negative. The mixer scored an average user rating of 2.5 stars out of 5 with contradicting reviews on both extremes.

Like other mixers in Sunbeam’s Mixmaster series, the 2594 is especially affordable. Many reviewers found themselves attracted to this machine as an intermediary between hand mixing and top of the line brands, such as Kitchen Aid, which have a much higher price tag. While the price was a favorite feature for many reviewers, several cautioned that you will “get what you pay for”. Reviewers who needed a basic mixer for very occasional use were largely happier with their purchase and the money saved. Other positive reviews mentioned how easy this mixer was to assemble, use and clean. A handful of reviewers also appreciated how quiet it was when in use and its ability to handle more than one bowl size.

However, the majority of reviewers were less than impressed with the quality of this budget mixer. A major complaint stemmed from the included beater attachment. According to one reviewer, the plastic disk, which is designed to spin the bowl, is more likely to clog with batter than to serve its intended purpose. Other reviewers had issues with the beaters rusting and were unable to get suitable replacements from Sunbeam.

While a couple reviewers felt that this mixer served their purposes, most owners were disappointed with the mixer’s performance. One reviewer called the included dough hooks “completely useless” and said the mixer seemed to beat the dough rather than knead it. Another reviewer complained the even the lowest of the 12 speeds was too fast for many jobs, including kneading. Lastly, several reviewers experienced the mixer’s motor sparking, overheating and dying when used on fairly standard recipes and bread dough. Many reviewers felt that Sunbeam cut costs by using lower quality parts.

Overall, unless you expect to only use this mixer rarely and on very simple recipes, we believe it will cause you more frustration than you will save financially. If you plan to use a stand mixer more frequently, for longer durations or for heavier uses, such as kneading bread, it would probably be worthwhile to invest in a higher end machine. If you would not use a mixer enough to warrant that expense, we recommend that you consider other more affordable mixers such as the unique Bosch MUM4405 Compact Mixer or the versatile Cuisinart HSM-70. Ultimately, the largely negative reviews of the Sunbeam 2594 make us weary of its quality and we recommend considering other mixers.