The Viking Professional 5-Quart Stand Mixer is an elegant workhorse boasting 800 watts of power and, unlike some modern competitors, a full metal gear transmission. Its planetary mixing action is powerful enough to knead through even the heaviest whole grain flours and yet still gentle enough to stir together delicate ingredients. You’ll be proud to have such a well-made and well-performing machine in your kitchen.

The Viking VSM500, the same as the  Professional 5-Quart Stand Mixer of KitchenAid, offers several practical features. Its tilting headlocks the mixing arm into place and also locks it out of the way to allow for more access to the beautifully crafted stainless bowl. Three stainless-steel attachments of top-notch quality are included. 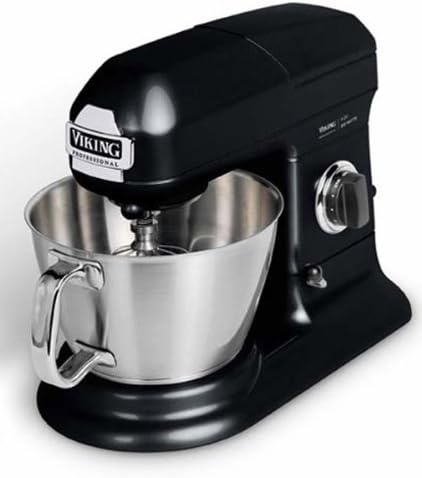 Viking’s “V Beater” attachment is designed for the majority of your mixing needs, while the whip quickly adds air to your mousses or egg whites. Even when dense whole grains are involved, the heavy-duty dough hook stretches and kneads doughs with ease. When you want to do more than just mix, a secondary power outlet can run proprietary attachments on either high or low speed.

In addition to being durable, the stainless-steel accessories, bowl and die-cast metal chassis make clean up surprisingly simple. When you’re finished cleaning the machine, built-in wheels on the base make it easy to roll the mixer out of the way.

Although the Viking Professional lacks some of the frills of its competitors, it’s a solidly built machine that consistently performs.

According to several reviews, proud owners of the Viking VSM500 Professional are exceedingly happy with the quality and power of their mixer. Many owners reported that they can’t imagine buying any other brand, much less needing to thanks to the durability of this mixer.

Reviewers rave about the superior and sturdy craftsmanship of the Viking VSM500. Enough users were impressed with its performance to give it an average rating of 4.5 stars out of 5.

Since most reviewers are thrilled with their Viking VSM500 Professional 5-quart mixer, we recommend it as an outstanding 5-quart mixer. It offers considerable power in a durable, well-constructed metal body. Everything about this machine, including the standard attachments, are built to last and out-perform. If you are willing to invest a bit more in a durable stand-mixer for everyday use, the Viking VSM500 will be the only one you will need for years to come.