The West Bend 12-Speed Stand Mixer is a lightweight mixer with a 12-speed 300-watt motor, providing the power to mix even bread dough. This mixer has a self turning bowl and three suction cups on the bottom of the mixer; allowing this light weight model to power through thick dough without hopping all over the counter. Because the mixer is lightweight and easy to use with easily cleaned components, it is perfect for the private kitchen. Available in black and white stainless steel this small but powerful mixer will look excellent in any kitchen. 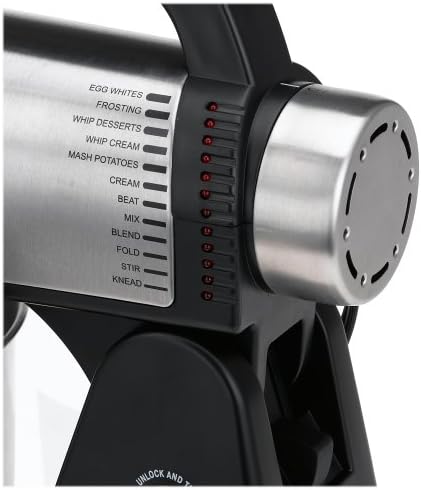 When researching the West Bend 12-Speed Stand Mixer we were able to find 63 reviews awarding the mixer 4.5 out of 5 stars. Despite the high star rating the reviews were mixed.

The majority of reviewers agreed that the mixer was quiet, which was nice in a small space or for teaching purposes. Despite the quietness of the mixer the majority of reviewers agreed that the machine works well and is easy to operate. A few reviewers found this mixer worked well for bread dough, gluten free and regular, as well as double batches of cookies. Another popular feature of the mixer was the detachable head that can be used as a hand mixer. This versatility was popular with experienced bakers and new bakers alike.

The competitive pricing of this mixer and its clean look were also mentioned in positive reviews many times. Several reviewers kept their mixers on the counter despite being lightweight and easily stored because they matched their kitchens so well. Reviewers also enjoyed that it come with two stainless steel bowls, as this made it easy to bake more complicated cake recipes or start on a new project despite a dirty bowl.

Negative reviewers stated that the mixer was competitively priced due to the poor manufacturing; one reviewer wrote, “in this case, it really is true you get what you pay for.” Another common complaint was that the mixers and other components were difficult to remove, several customers had to resort to a wrench or a hammer to get them out. The beaters were also reported to break or bend easily.

Another issue highlighted by the negative reviews was the mixers inability to handle double batches of cookies. One reviewer had this to say to those that complained about it: “Yes some reviews said they couldn’t make two batches of cookie dough at the same time, this was not its design. You want double, buy a commercial stand mixer.”

The most common complaints were faulty bowl spinning, the mixers tendency to bounce around, and the beaters not being able to mix the batter well, pushing the dry ingredients to the side. Several reviewers had a serious issue with the bowl not turning as it should be, and that they had to move it with their hands. The bottom suction cups were often said to be ineffective and because of this the mixer would bounce all around while trying to mix or beat the dough or batter. Several reviewers mentioned the mixing issue as a major annoyance as they had to constantly scrape the bowl to get anything mixed.

Given the reviews, we suggest that you only buy this mixer if you plan on using it lightly, as it does not have the power for heavy use. However, for the price this mixer seems ideal for the personal kitchen and those that bake occasionally; and do not require a very expensive or powerful mixer.

Where to Buy the West Bend 12-Speed Stand Mixer

You can buy the West Bend Stand Mixer from many big retailers offline or online like Amazon, Walmart, Costco, Best Buy, Target, etc. Amazon.com is definitely a leader in price for stand mixers including the West Bend. But no matter where you decide to purchase, read the reviews at Amazon as it is not only a store but a community where you can see other peoples ratings and reviews. Click on the links below to visit the product website for additional information and special offers.