A stand mixer basically consist of a large mixer head that is mounted on its own base or platform. A motor hidden in the mixer head provides the power to spin a beater or other attachments at speeds ranging from slow to fast. Stand mixers are usually designed as either a tilt-head or bowl-lift type. Professional grade stand mixers tend to be bowl-lift type as they are sturdier and far more stable, which usually cost more. A higher-priced stand mixer often has a circular rotating beater that covers the whole area of the bowl. A lower priced mixer may only mix in the middle of the bowl, requiring more scraping of the sides to incorporate ingredients. 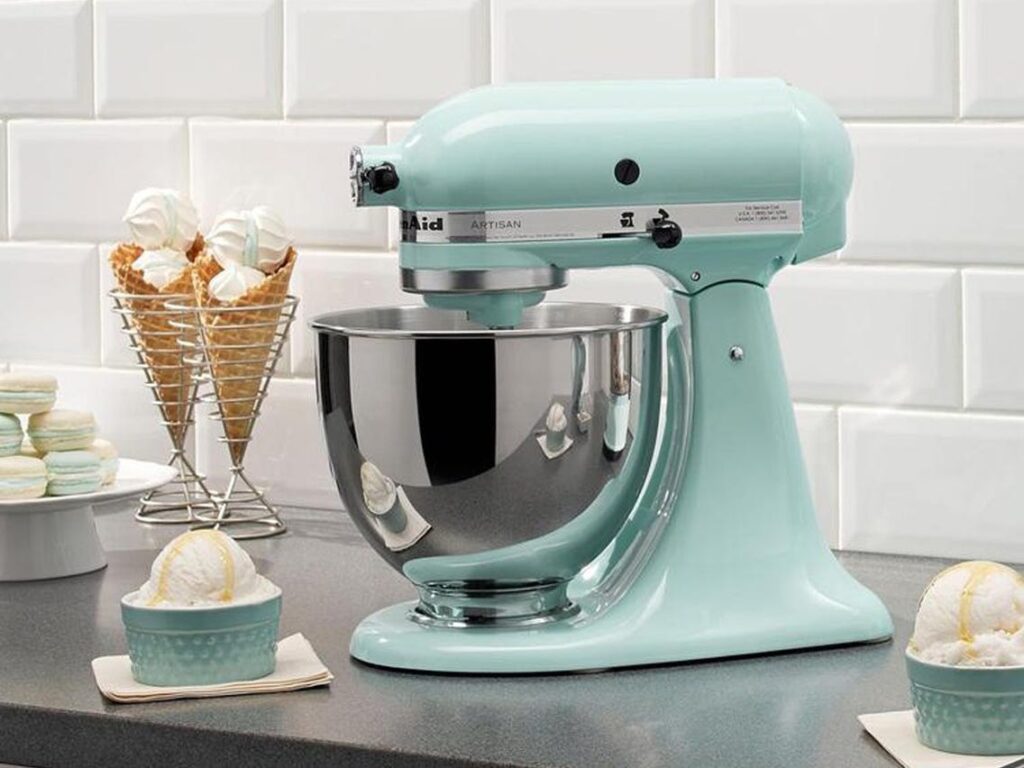 Another significant factor may be the material that the mixer itself is made out of. There are some cheap, lightweight mixers that have a lot of plastic pieces and these will generally be less expensive than mixers that are made from die cast metal and other more durable materials. A stand mixer made from quality materials may cost more but not only is it more durable it is also heavier and the extra weight can actually help with stability. A lightweight mixer will sometimes have a tendency to wobble and can almost walk across the counter when you are mixing something. That just doesn’t happen with a heavy, metal stand mixer.

One of the most significant factors that affect the price will be the power of the motor. More power will cost you more money so a stand mixer with a higher wattage is generally going to cost more than one with a lower wattage. Wattage typically ranges from 200 to 1000 and is not the only factor however. The speed of the mixer can be a factor also. A faster mixer with a bigger power will usually cost more money.

Another significant factor that determines the price of the stand mixer is the size of the mixing bowl. Stand mixer bowls range in size from 1.5 quarts to about 7 quarts. The more capacity the mixer bowl has, the more the cost of the stand mixer. The material the bowl is made of is another contributing factor to the cost. Bowls come in metal, plastic, or glass. The best option might be metal if you want something heavy duty that will not break or stain but will cost more.

The items discussed above are probably the biggest factors that determine the price of a stand mixer. Whenever you are shopping for a kitchen appliance price is going to be a concern but you must also carefully consider how you intend to use your mixer. If you are going to use a mixer mostly for beating eggs or making pancakes then you can probably go with a less expensive model. Something that may not be the fastest mixer with the most powerful motor and something that has a smaller capacity bowl.

On the other hand, if you are going to be doing a lot of cooking and baking and if you are going to be making heavy doughs for things like breads and cookies then you will need a more powerful motor and a larger capacity bowl. With heavy dough it would also be a good idea to have a mixer that is made from quality materials with enough weight to give you the stability you need.

Hopefully we have helped clear some things up for you and you will have a better idea now about the factors that determine the price of a stand mixer. Before you start shopping for a mixer take some time to think about how you intend to use it as well is how much money you’re willing to spend. Try to find the balance between getting all of the features you need while also finding an affordable price. It’s also a good idea to research customer reviews online to help you make sure you are in fact purchasing a quality mixer. If other customers are happy with a particular mixer then there’s a good chance you will be as well.