The Cuisinart SM-70 7-Quart Stand Mixer offers an unprecedented 1000 watts of brute power encased in durable die-cast metal. With a 7 quart capacity, it efficiently powers through multiple batches of stiff dough. Despite having a higher wattage than most of its competitors, this Cuisinart SM stand mixer has 12 gradient speeds to ensure that everything from chocolate chip cookies to delicate souffle will mix perfectly.

The mixer includes 3 dishwasher safe attachments to help you start baking right away. The wire whisk attachment is perfect for quickly beating air into ingredients, while the flat beater can be used to mix everything from cake batter to meatloaf and mashed potatoes. The dough hook will rescue your arms from the archaic task of kneading bread. 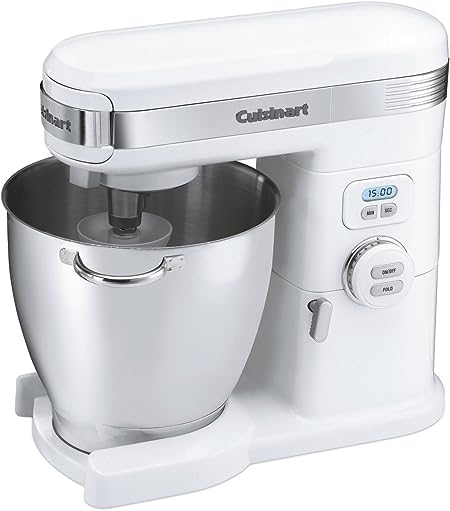 For added convenience, Cuisinart has included a few unique touches in this model. A digital countdown timer gives the chef the freedom to walk away knowing her recipe won’t be over-mixed. For more precision jobs, the pulse button gently folds in the ingredients that require more attention. These clever features make the SM-70 simple to use the machine.

In researching the Cuisinart SM-70, we found that the majority of reviews were enthusiastically positive, giving the product an average of 4 stars out of 5. However, there were some contradictory and negative reviews, written mostly by owners who unsuccessfully attempted to use this consumer mixer in place of a professional machine.

Many reviewers who purchased this model were looking to upgrade to the large 7-quart size and are thrilled with the result. Users are impressed with how the mixer handles double or triple batches without getting bogged down, overheating, or “walking” across the counter. While many competitors have begun to make their motor gear housings with plastic, Cuisinart continues to use metal for both the gears and the gear housing, giving many reviewers peace of mind and added satisfaction.

Several reviewers appreciated the single piece splash guard, which comes standard and lowers with the beating arm. A number of users said they enjoy being able to use a splash-guard without having to assemble it every time. Since all of the attachments are dishwasher safe, the mixer cleans up within minutes and is being called “a time saver from start to finish”. Another favorite feature of this mixer is the countdown timer with auto shut off, which gives you a perfectly timed mix without guesswork.

Many of the contradictory reviews resulted from the overuse of the machine. While some users were able to use the SM-70 as a primary mixer in small bakery businesses, others were frustrated when doing so quickly overloaded the mixer’s capacity. Fortunately, the automatic thermal shut off prevents overheating from becoming an issue. Despite its high wattage, this mixer is still rated as a consumer appliance for home use. If you are looking to do large, constant mixing, it would probably be best to upgrade to a machine intended for commercial or professional use.

The largest complaint expressed by a handful of reviewers was with Cuisinart Customer Service. Many purchased the SM-70 for its superior warranty, which fully protects the motor for 5 years and the overall product for a limited 3 years. While many users experience the flawless performance from their mixers, those that encounter initial problems report nightmarish experiences with Cuisinart Customer Service. A handful of unhappy reviewers cited long turn-around repair times and high shipping costs incurred by the owner for repair.

The majority of reviewers are immensely pleased with the performance of the Cuisinart SM-70. Users appreciate the uncommon size and strength of this machine, but those that do not push it beyond its intended purpose are happiest with the results. Ultimately, if you’re looking for a large capacity mixer for consistent, heavy-duty home use, we believe the Cuisinart SM-70 is an excellent choice that has certainly earned its 4-star rating.

You can buy the Cuisinart SM-70 Stand Mixer from many big retailers offline or online. But no matter where you decide to purchase, read the reviews online as it is not only a store but a community where you can see other people’s ratings and reviews.