Hamilton Beach 63232 allows for flexibility in mixing, owing to its 12 speeds. It all speeds with the kind of results you are expecting. This is the best stand mixer at a price under $200

Mixers are important equipment in kitchen. They make work easier when you are mixing ingredients such as dough, eggs and the like. However, no mixer performs like Hamilton Beach 63232 Eclectrics. It mixes with high speed and precision, resulting into a consistent mixture. No matter what kind of ingredients you want to blend, trust this stand mixer to do it for you. It has other amazing features, which make it the most sought after mixer in the market. You certainly need it in your kitchen. Besides, being functional, it is also a centerpiece, all thanks to its glowing red color.

This one feature makes the stand mixer to stand out among others. It works in two ways, where the mixing head revolves around the bowl while the beater goes to the opposite direction. This way, the ingredients are mixed completely, without the need of engaging your hands.

The stainless steel bowl is rust resistant and easy to clean. It is also large enough to prepare enough batter at a time. In addition, the bowl has a handle, to aid in its transfer from and to the base.

The stand mixer also features a tilt-head design, which is an asset when you are emptying the batter. It ensures that nothing is left lingering on the walls of this high-tech stand mixer. The design also has a quick release feature, giving the user more control over the appliance.

This makes sure that there is continuous energy flowing to the Hamilton Beach 63232, for consistent blending, as one adds the ingredients.

The control panel features 12 settings to help the operator to regulate the mixing based on the results they want. Hence, you can start at a low speed and increase later as you proceed with the mixing. This helps to prevent splatters, although there is a splatter guard on top of the mixer to prevent that from happening.

Hamilton Beach 63232 stand mixer comes with three mixing components including whisk, flat beater and dough hook. All these accessories, enables you to start cooking right after you are done with the mixing. The hook is entirely for kneading the dough.

The equipment is energy efficient, drawing about 400 watts from the main power stream. This is nothing compared with other appliances you may have in your house. 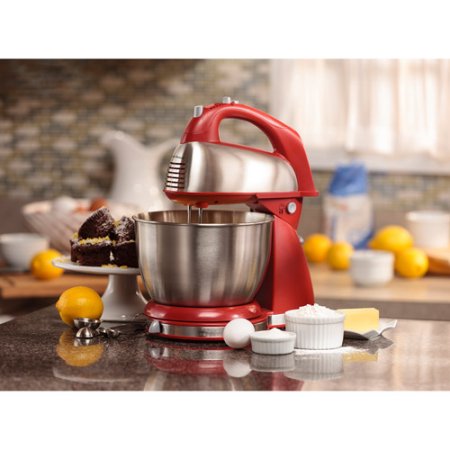 From its inception, the Hamilton Beach 63232 Eclectrics stand mixer has received numerous positive reviews, which can be attributed to its amazing features. Up to date it has gotten about 582 reviews. Out of these reviews about, 397 gave the product a five star rating, 102 customers rendered the mixer 4 stars whereas the rest were shared between three to two stars. All the same, about 80% of the reviews highly regarded the mixer.

From the above account, it is no doubt that the Hamilton Beach 63232 Eclectrics stand mixer is a reliable appliance. It may be all you need to make your dream baked specialties. Forget the traditional hand mixing and embrace the technology. It is easy to run, fast to mix and intensely efficient. What more could you ask for? Besides, its red color is enough reason, to make this equipment a member of your kitchen countertop. You are also assured of three years warranty. You should consider this stand mixer. As you can see, it speaks for itself, with its great features.

Hamilton Beach 63232 allows for flexibility in mixing, owing to its 12 speeds. It all speeds with the kind of results you are expecting. This is the best stand mixer at a price under $200