The KitchenAid Limited Edition Pro 620 KP26M8XMC Stand Mixer is the ultimate in professional-grade mixers accessible to the general public. Offering a soft start feature to keep dry ingredients inside the bowl, and a 6-quart stainless steel mixing bowl that can handle a double batch of cookies with ease. This die-cast all-metal engine, with ten speeds; can handle even the largest family’s baking needs. Massive amounts of cookies and giant cakes will no longer be an issue as you can mix them up all at once with this mixer. 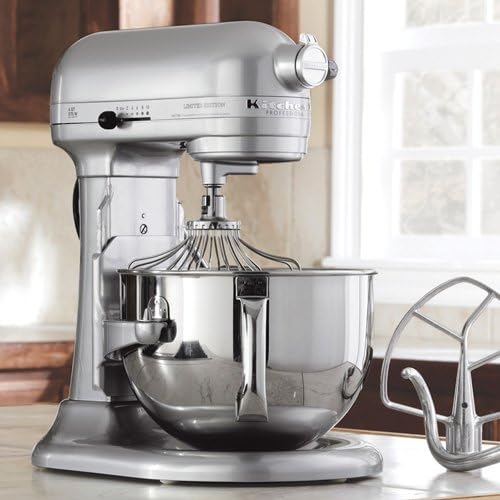 When we researched the KitchenAid Limited Edition Pro 620 KP26M8XMC Stand Mixer online we were able to find six reviews, which gave this mixer 4 out of 5 stars. The reviews were overwhelmingly positive, with a few negative reviews that could have been avoided, for the most part, by reading the instructional booklet.

Most of the reviewers agreed that the motor was incredibly strong and able to handle a lot of batter and cookie dough. A few reviewers had issues with bread dough; one claimed: “it would get really hot and could not fully knead even soft dough.” Since this mixer was advertised as a cookie and cake mixer, most reviewers did not find this to be a troubling issue. A few reviewers even suggested reading the instructional booklet and making a few adjustments to the mixer could fix this.

On the other hand, A few reviewers complained that the all-metal motor was loud and annoying. Responding to this a former factory worker said “all those interior parts pushing against each other to make the mixer paddle turn through heavy loads makes the noise. If you were to have a wimpy mixer there wouldn’t be much noise at all.” Most reviewers were not put off by the noise, finding it to be of little concern considering the power of the engine.

One review highlighted a significant issue, which seemed to be unit specific and not related to all of the mixers. This reviewer’s main driver unit fell off the machine but was replaced quickly with apologies about the glitch. This however was the only review complaining about any sort of breakdown or serious glitch in the machine.

Only one design flaw was brought up, the bowl-lift style was found to be an annoying feature for a few reviewers. These reviewers stated that because the mixer components were so long they had to be removed and dropped into the bowl before the bowl could be removed. Several reviewers found this to be a messy and annoying issue but were not seriously put off by it, as they had no other issues with the mixer.

This mixer was given great reviews and no major design flaws were found. Most reviewers agreed that it was prudent to read the instructional booklet before use as the machine has lots of options that can eliminate perceived problems. In fact, most of the negative reviews could have been avoided if the reviewer had read their instructional booklet. Given the excellent reviews and extensive features, we feel comfortable suggesting this product to consumers looking for a sturdy mixer to handle their cookie and cake making needs.